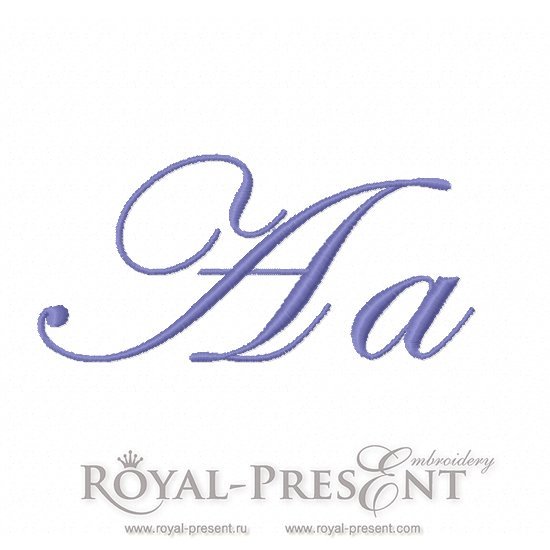 Purple Embroidery Font, that is great for ladies and even little girls. Just change it’s colors to fit various occasions.

We present you a series of machine embroidery designs Purple Embroidery Font, the must-have for every needlewoman! You can use one letter for a monogram, several – to make a word or phrase, as an example, wish good morning on a towel or write a little congratulating message on gift textiles. Also with this series, you will be able to create a lovely embroidered metric for baby, place it in a frame and hang on the wall in the nursery.

They say that the invention of alphabet and writing might be called one of the greatest achievements of mankind. The first attempts to organize the spoken language were made by the ancient Egyptians; however, they chose hieroglyphs for their texts. Some semblance of the alphabet we know was developed by the Phoenicians in the 3-2 Millennium BC. Briskly trading in the Mediterranean, they needed a universal way of communication and calculation, and that, as many believe, gave a strong impulse to development of a phonemic script. By the way, the only character, which has come down to us from those distant times in unchanged form is “O”, though to the Phoenicians it was a consonant.

Now the Roman script consists of 26 characters, surely it is not the largest in the world. For instance, the Khmer people put into their ABC as much as 74 symbols; how hard must it be for their school children to learn native grammar… But representatives of one of the tribes of Papua New Guinea use just 12 letters, which they consider enough for full communication. This is where you know the value of the expression “brevity is the soul of wit”.

For ages people used their alphabets, not knowing any special way to identify the beginning of sentences, or names. Only in the fourteenth century, Roman scribes introduced capital letters, so now you can start writing your name with a beautiful and prominent symbol or put it as a monogram on your favorite things.

By using machine embroidery designs Purple Embroidery Font, you may decorate a variety of textile products with your initials, and they are no less impressive than the monograms of some nobles. Take notice, how elegant capital letters are, they will be easy to read and at the same time will look wonderful on textiles.

In the lands afar, where spring has been reigning from the beginning of times, a fountain of mesmerizing beauty and magical power lavishes all the nearby meadows with its iridescent …

Any self-respecting person with a sense of taste should always strive for beauty. Beauty in the life of such a person must be present in everything. A true esthete is …

Log cabin, pinwheel, stripes, stars – various block patterns made of mixed fabric scraps is a foundation for the beautiful decorative art of quilting. And, needless to say, most crafters …

They say that if you give a girl the right shoes and she can conquer the world. Well, here in Royal Present Embroidery, we say that a girl shouldn’t wait …

Colored eggs are rooted so deeply in Easter celebration that we just can’t imagine it without these rainbow drops. It’s like some magical of plant bursts in bloom, lavishing us …

The shop works automatically without human intervention. The designs are sent to the email address you enter while checking out.

You can find out more about which cookies we are using or switch them off in settings.

This website uses cookies so that we can provide you with the best user experience possible. Cookie information is stored in your browser and performs functions such as recognising you when you return to our website and helping our team to understand which sections of the website you find most interesting and useful.

Strictly Necessary Cookie should be enabled at all times so that we can save your preferences for cookie settings.

If you disable this cookie, we will not be able to save your preferences. This means that every time you visit this website you will need to enable or disable cookies again.